Why Everyone Should Hike Lagauvegur

Iceland has become a major tourist destination and it’s easy to see why. With cheap flights thanks to Wow Air, I recommend that every traveler checks out the unbelievable scenery that this picturesque country has to offer. 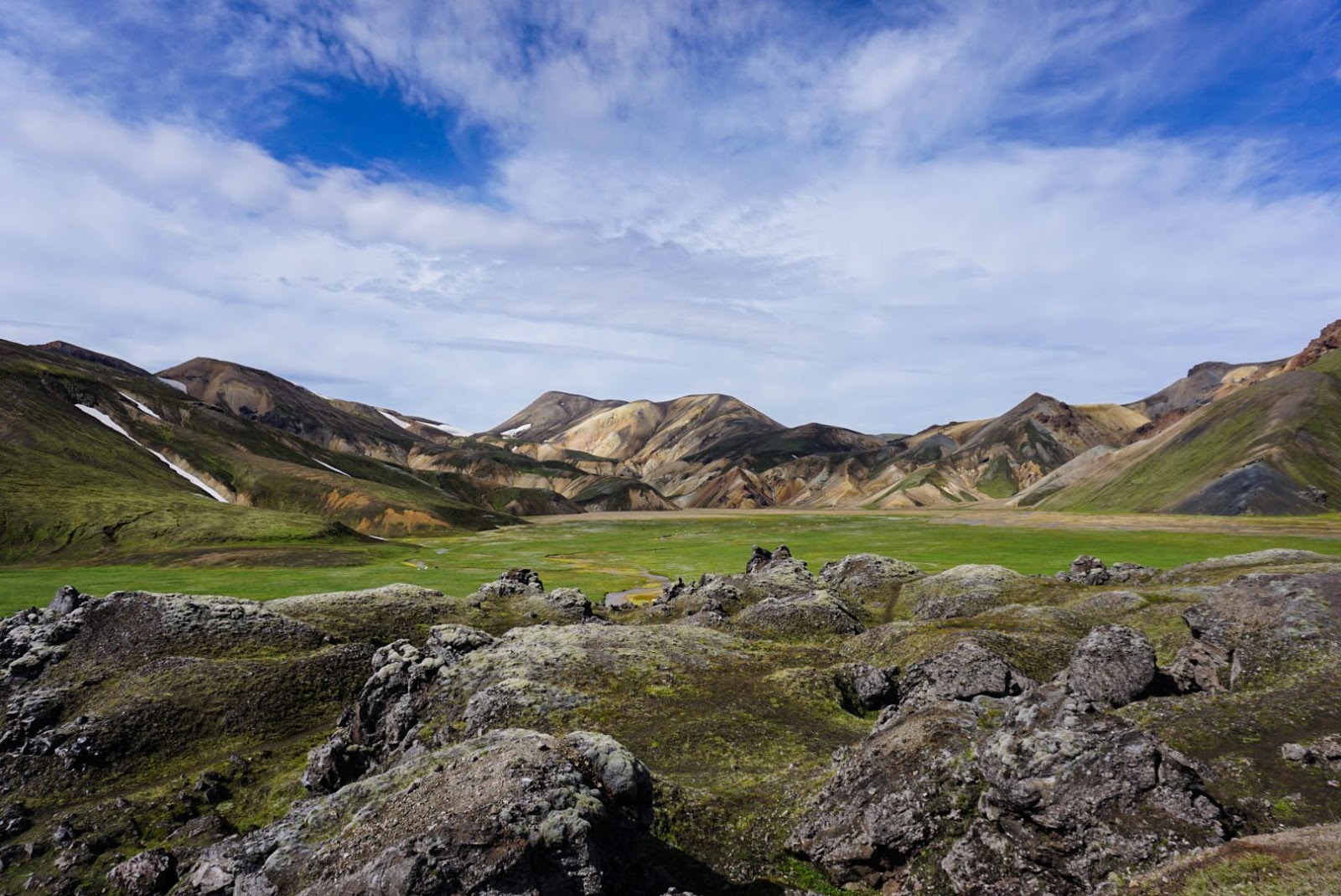 The Lagauvegur trek covers about 50 miles from the southern coast to the glacial inland. It’s a great way to see the country’s beauty and take in the vastness of the landscapes. We hiked in July 2016. 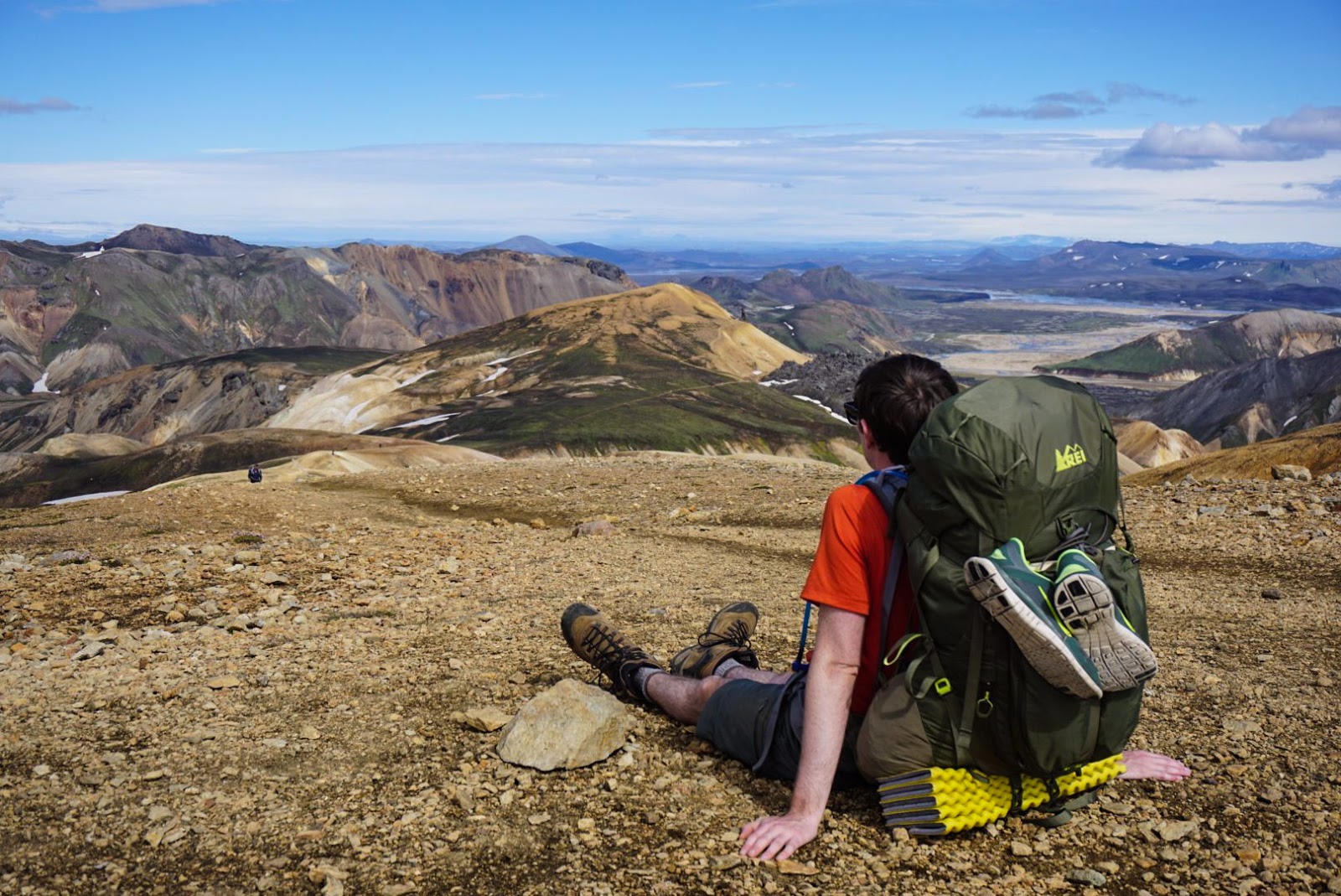 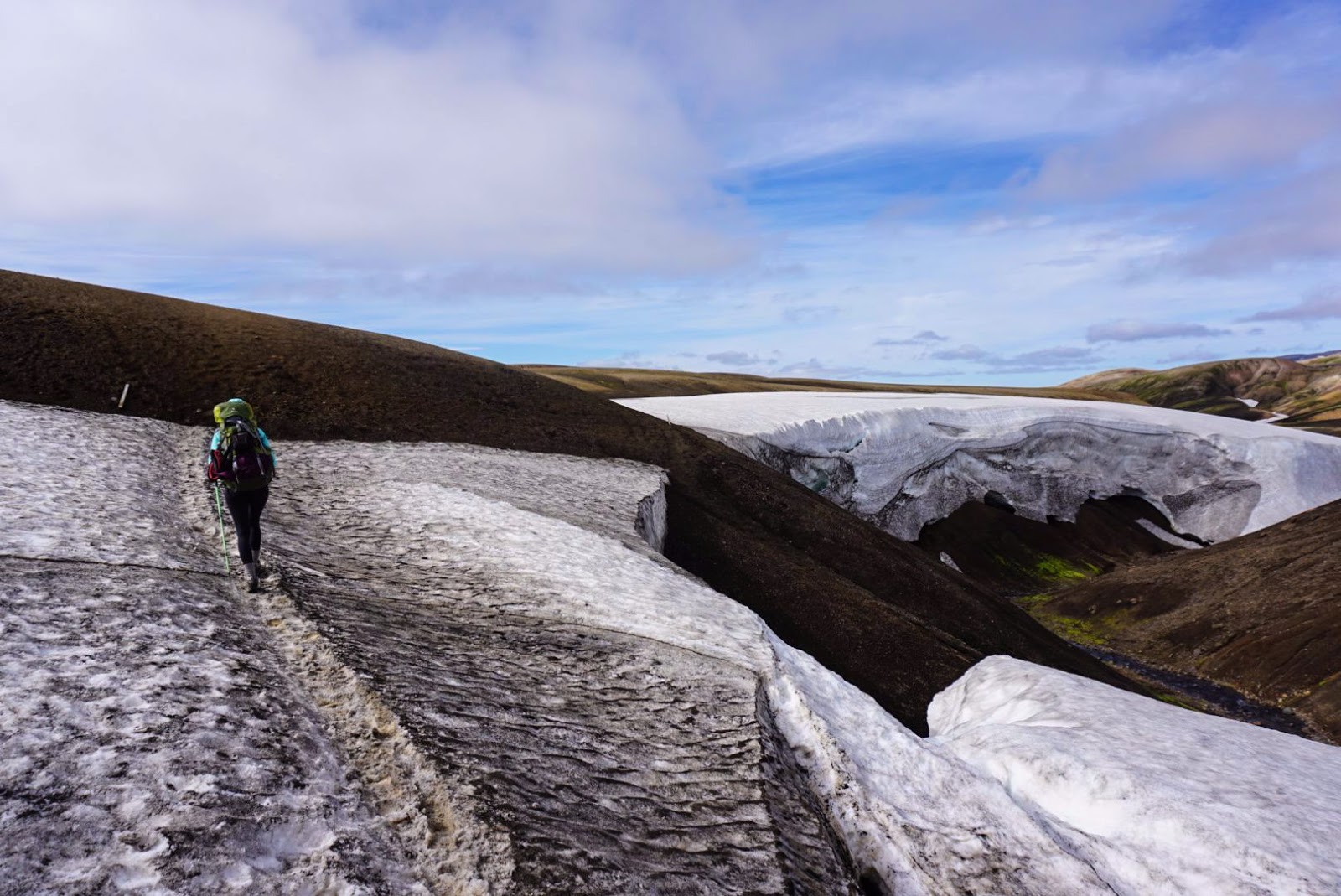 The terrain isn’t overly strenuous, and I would say anyone in good shape could manage. Prior to Lagauvegur, I had only backpacked on some two day trips. The hardest part isn’t hiking, but carrying five days worth of food and supplies on your back. We’ve invested in some good gear including the Nemo Hornet 2 person tent which weighs just over two pounds. I recommend that anyone interested in the trek look into purchasing lightweight gear and a good backpack. We also stocked up on freeze dried meals which were surprisingly decent, but maybe we were just that hungry after a day of hiking that anything calorie dense could satisfy us. If you don’t have any backpacking equipment and don’t plan on doing additional treks in the future, you might want to look into one of the guided trips. When we stayed at the hut in Alftavatn, we spoke to one of these large groups. The hikers just carried a day pack, and the guide drove their luggage from hut to hut. Additionally, the guide prepared breakfast and dinner at the hut and gave them sandwiches to eat on the trail. Some of the hikers in the group were people who would not have hiked it otherwise since they were older or single and didn’t want to hike alone. I don’t know how much the guided trek costs, but we were envious of their light day packs and fresh meals. 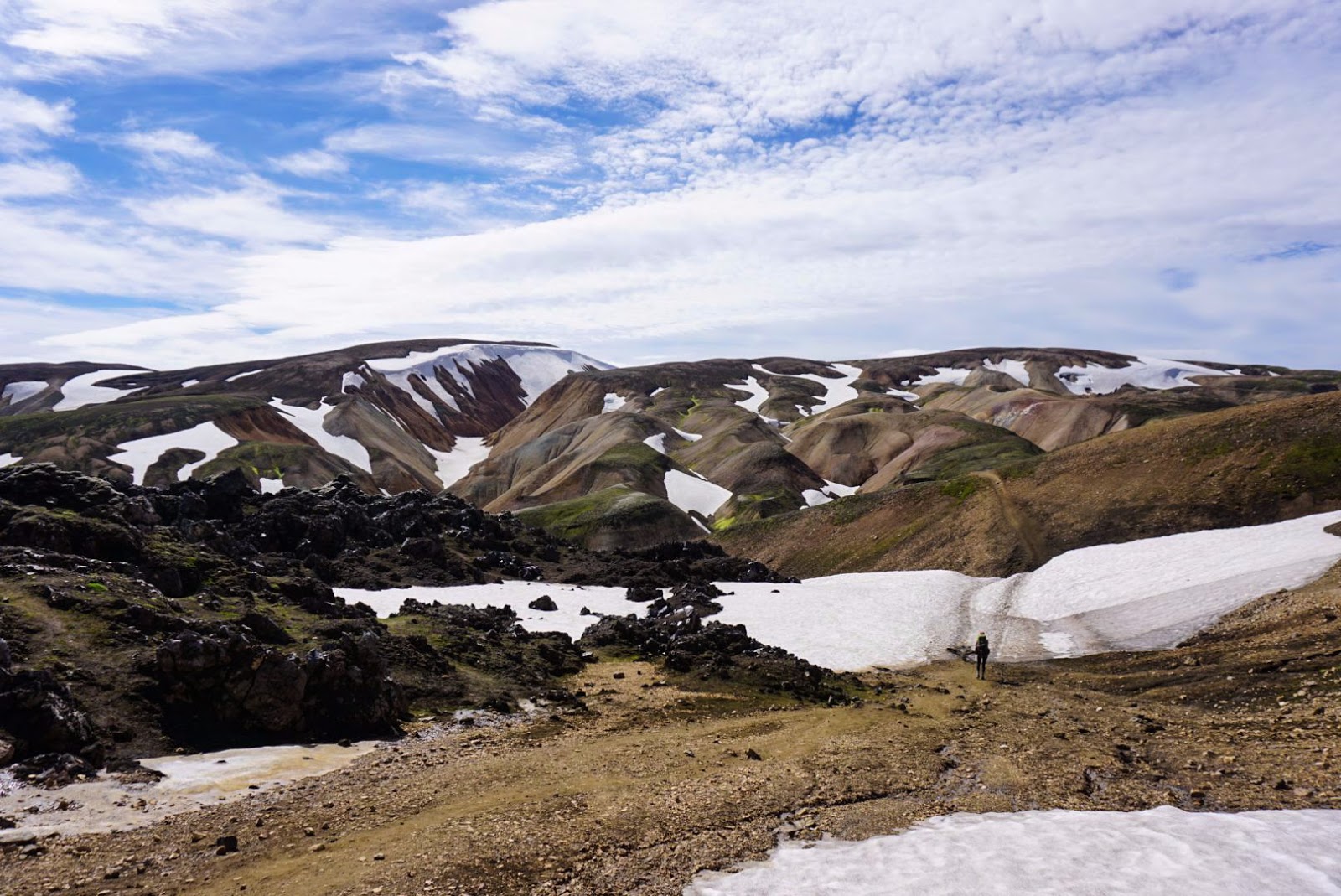 You have two options for lodging on the trail. You can pay to camp, which costs about $15 per person per night, or you can pay to stay in the warm huts, for about $70 per person per night (it was $60 when we went but has gone up since then). You have to reserve your spot in one of the huts a few months in advance and can do so online, whereas you can pay to camp when you get there. We did see some people camp along the trail for free, but this is really frowned upon and generally every who sees you will think you’re a dick. Just don’t do it. Most of the huts are in very remote areas, so it makes sense that it costs a bit to have a bed, kitchen, and bathroom. If you camp, you just have access to the bathroom. You can also pay for a warm shower for about $5 for 5 minutes, not included in the hut or camping prices. We also heard some people ask about charging phones, but this costs around $10 since they use solar power for all of their electricity. 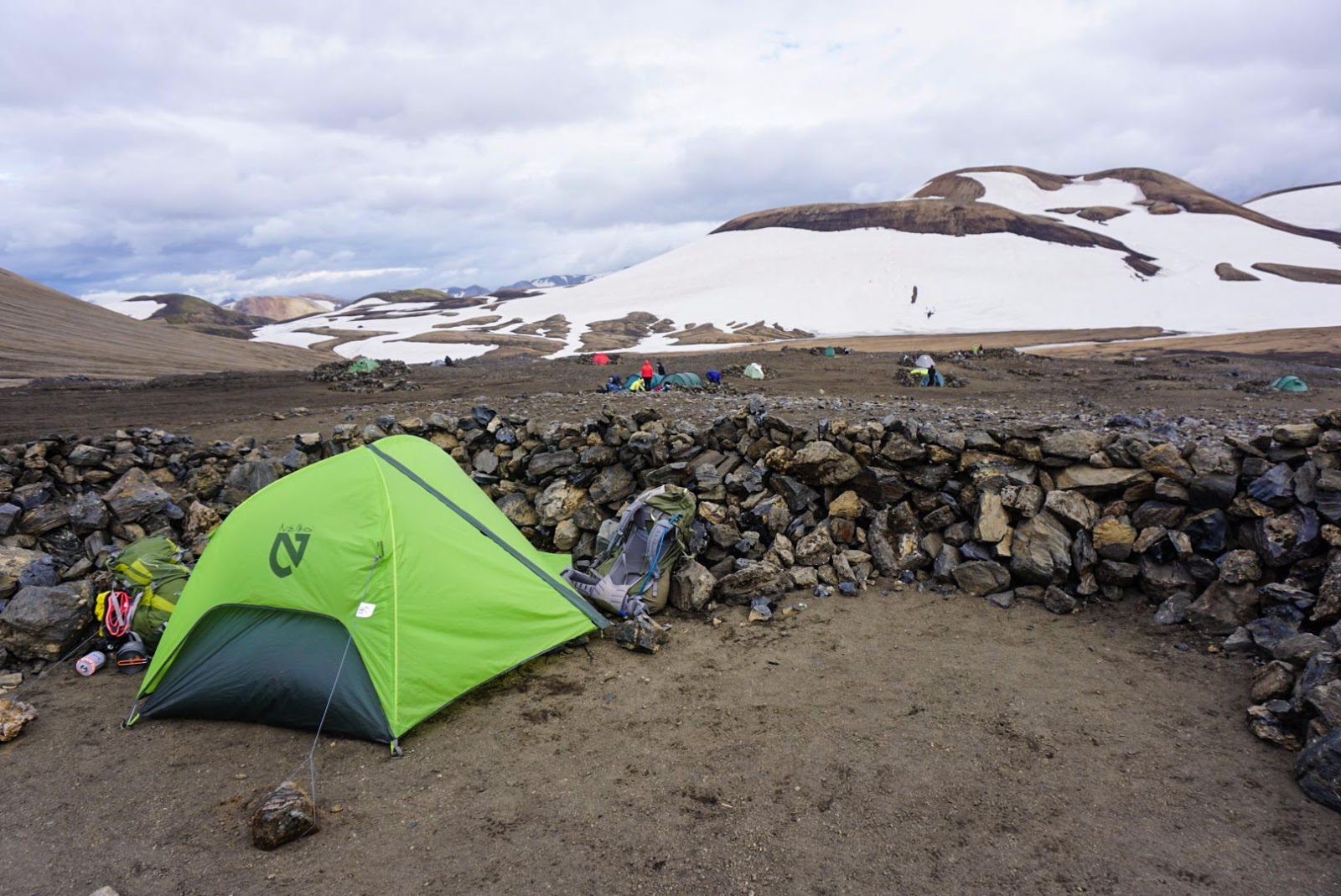 The huts are set up like an overnight summer camp. There are full size bunk beds all crammed together in one room with a table in the middle. We thought the mattresses were fairly comfortable, but we were also comparing them to our ground pads. There are no sheets on the bed, so you still need to bring a sleeping bag. We only stayed in the huts in Álftavatn and Thorsmork since we were trying to balance comfort and cost. I recommend staying in at least one hut for the experience and the chance to dry off if you hit any rain, unless your very opposed to sleeping in the same room with up to twenty other people. If we were to hike again we would definitely get the hut in Hrafntinnusker which fills up first since it is the smallest in the coldest, windiest area. 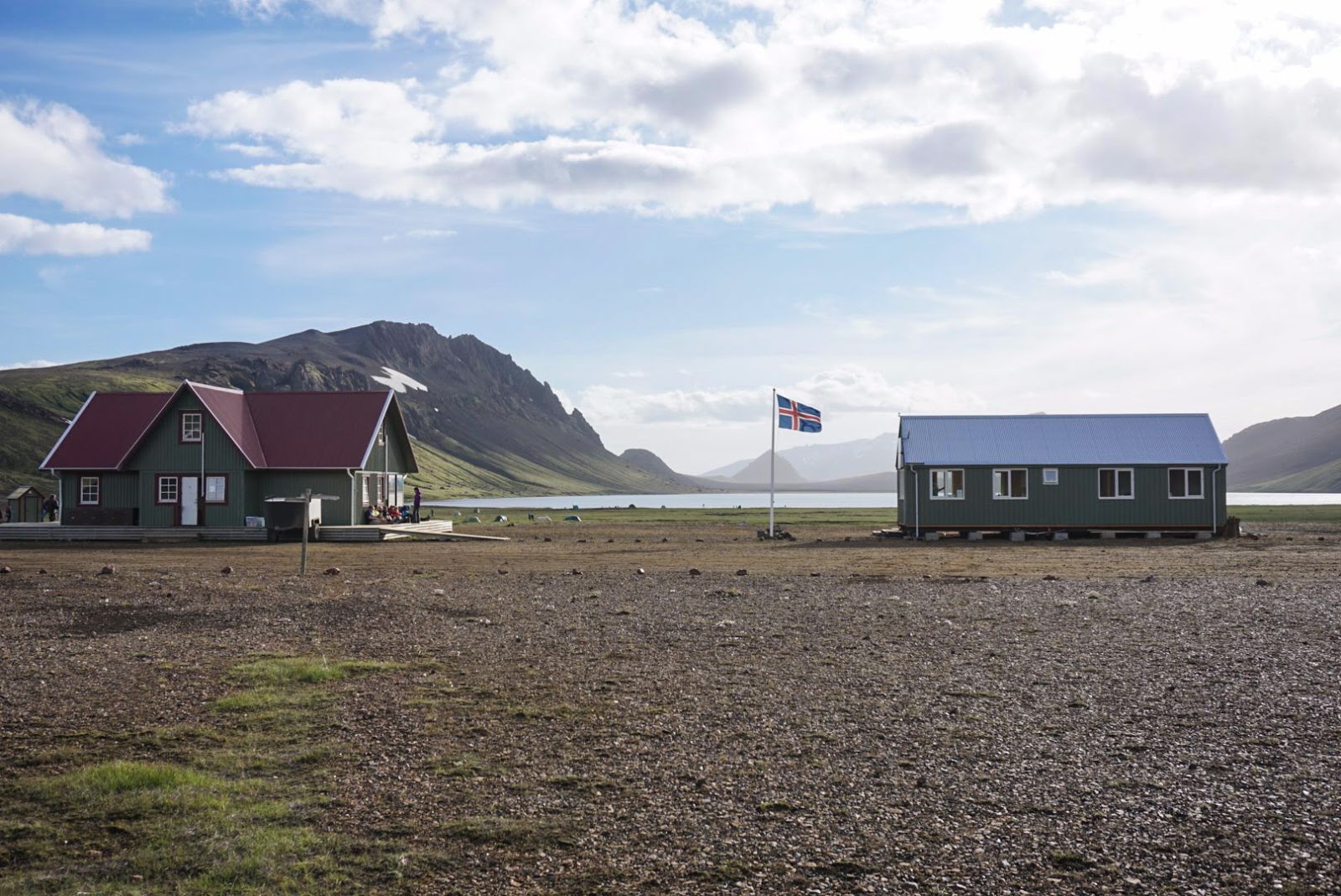 I almost didn’t agree to the hike after I heard about the river crossings. There are four crossings in total thanks to a recent bridge put in after Thorsmork to eliminate the previously worst crossing. I do not enjoy being cold or wet so the idea of passing through glacial water sounded like the last thing I wanted to do on my vacation. Here’s the thing, if I made it, so can you. Believe me, it’s really not that bad. Yes the water is absolutely freezing, but it’s only up to your knees in the deepest spots (as long as you cross in the right place). A few minutes of numb feet and calves should not deter you from the rest of the hike. Just bring water shoes and extra wool socks for after you cross and you’ll be fine. And you get some bad ass pictures out of it! 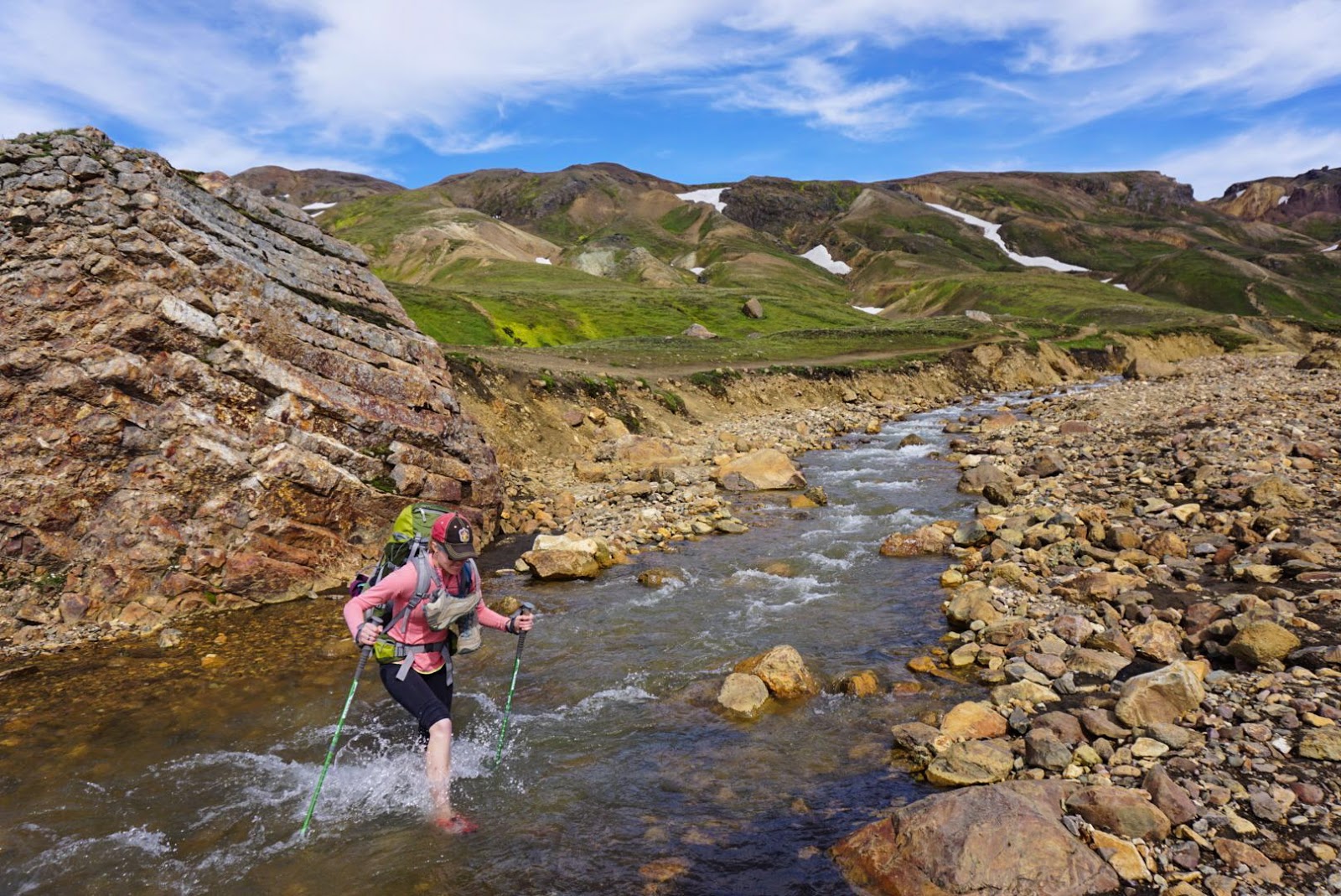 Landmannalaugar to Thorsmork or Skogar?

The traditional Lagauvegur trek goes from Landmannalaugar to Thorsmork. You can do this in four days or less if you really want to. A lot of the hikers we met were stopping at Thorsmork and getting a bus back to Reykjavik. On our fifth day, we continued from Thorsmork all the way to Skogar which is about 14 miles. This is the longest day by far and definitely the most spectacular. You pass through two glaciers and experience uninhabitable land. I highly recommend continuing to Skogar, and I don’t even like the cold. Nothing we saw in the first four days compares to our experience on the last day. Hiking across glaciers is an unbelievable experience. Even though the cold was miserable and I ran on adrenaline for about two hours as we crossed through the pass, I have no regrets. I was able to see landscapes that didn’t look like Earth. Pictures can’t capture the feeling of being there to experience the natural beauty. 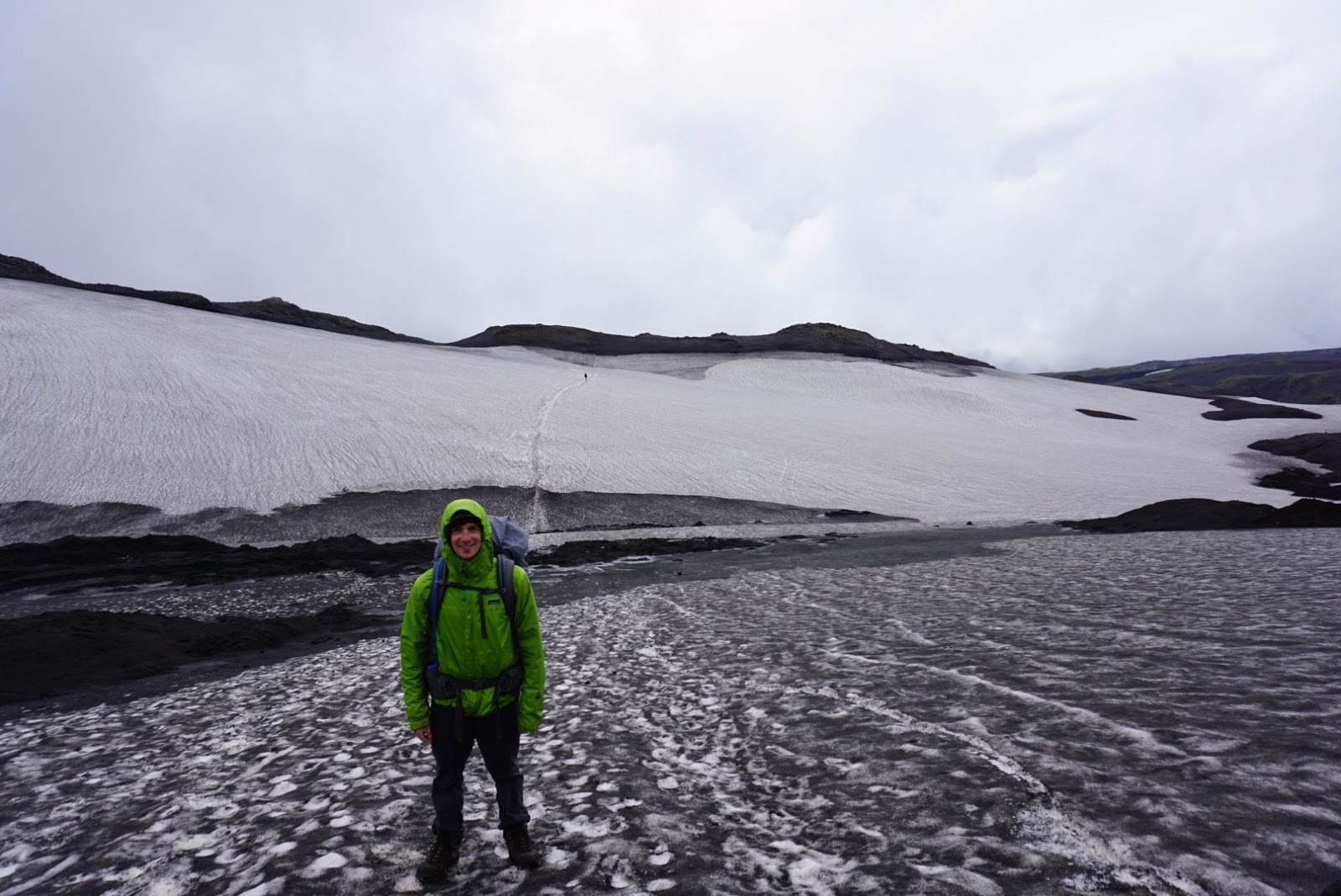 After crossing through the glaciers there is a hut you can pay $3 to warm up and change at. We didn’t pay since we were lucky to get good weather, but if we had been soaked we would have. The miles after the pass were lush and beautiful. The hike ends at Skogafoss, the most photographed waterfall in Iceland. 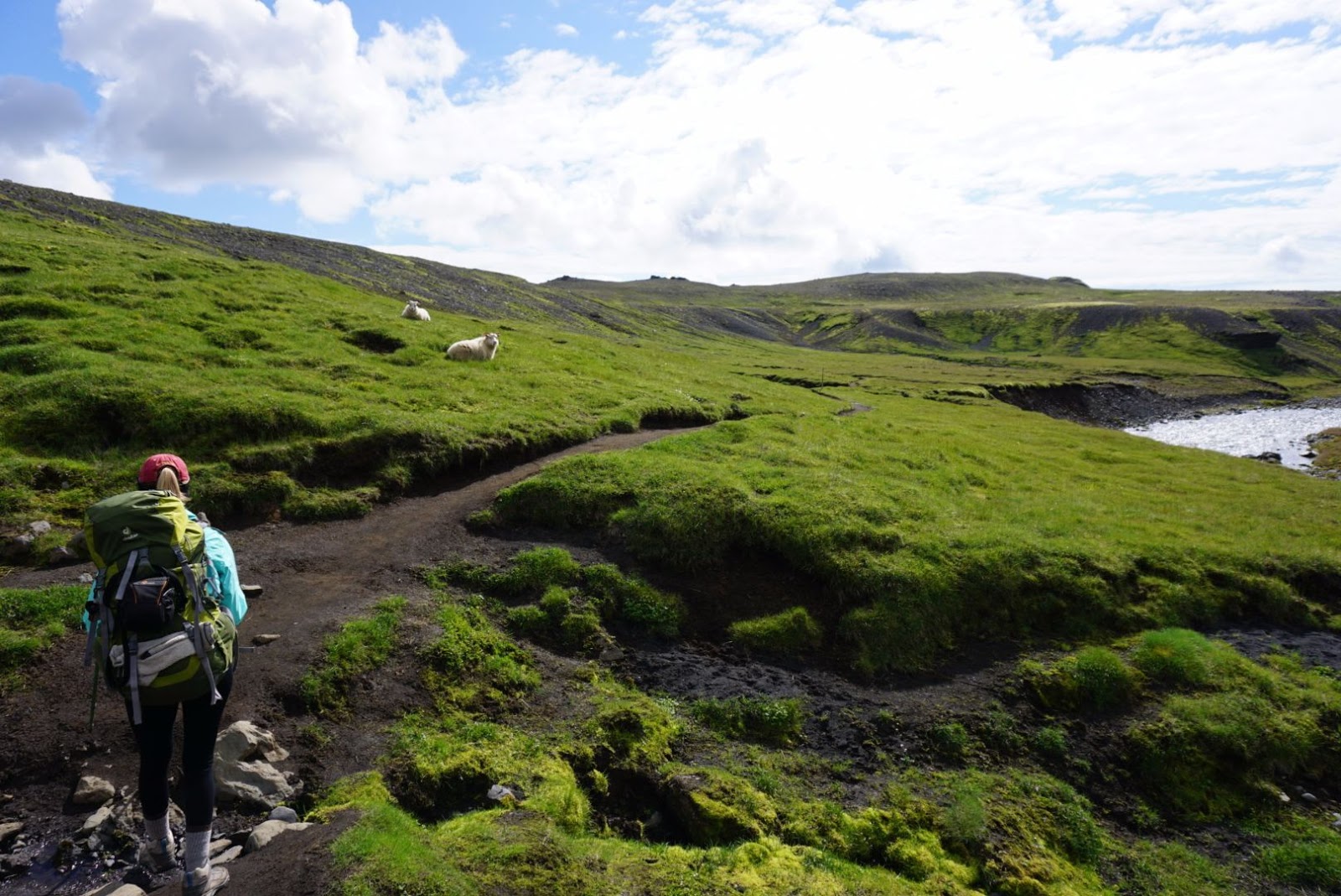 So you’re buying your plane tickets and investing in some gear, but your flight lands in Reykjavik and you’re thinking “But wait I need to start in Landmannalaugar!” Have no fear, there are several bus companies that can take you from one place to another. We used Reykjavik Excursions and paid about $60 per person each way. The buses were clean and comfortable and arrived on time. We left from the Reykjavik campsite at 6:40am and got to Landmannalaugar at 10. The bus stopped several times shortly after leaving Reykjavik at some other campsites and hostels. To get back, we caught the bus at the Skogar hostel. There is a bus from Thorsmork if you really don’t want to hike the fifth day, but I can’t emphasize enough how much I recommend that you do! 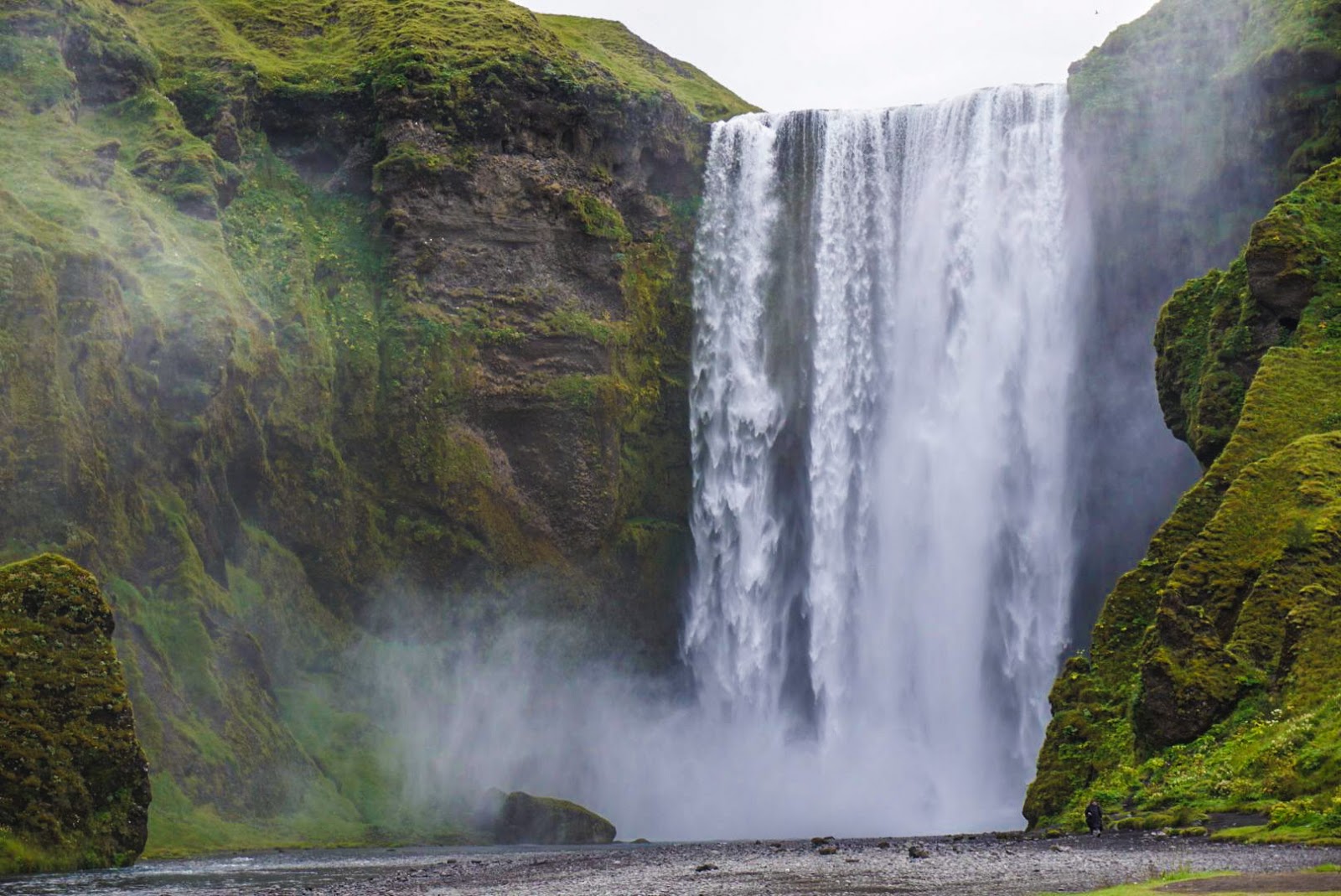 Posted by Courtney at 11:33 AM
Email ThisBlogThis!Share to TwitterShare to FacebookShare to Pinterest