We spent 12 days in July 2019 hiking through France, Italy, and Switzerland. You can't beat the views as you circle Mont Blanc and pass through three countries in the Alps. 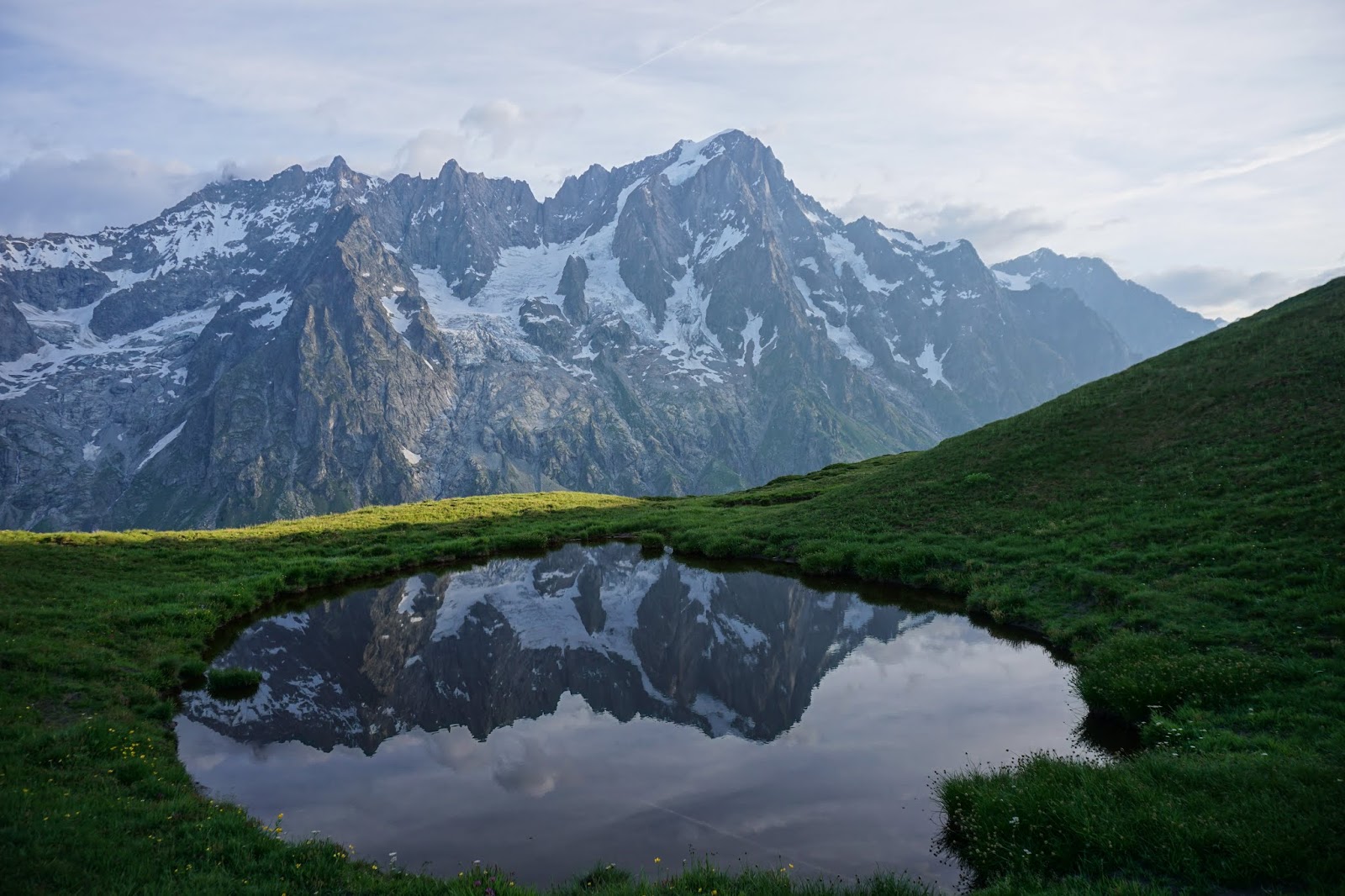 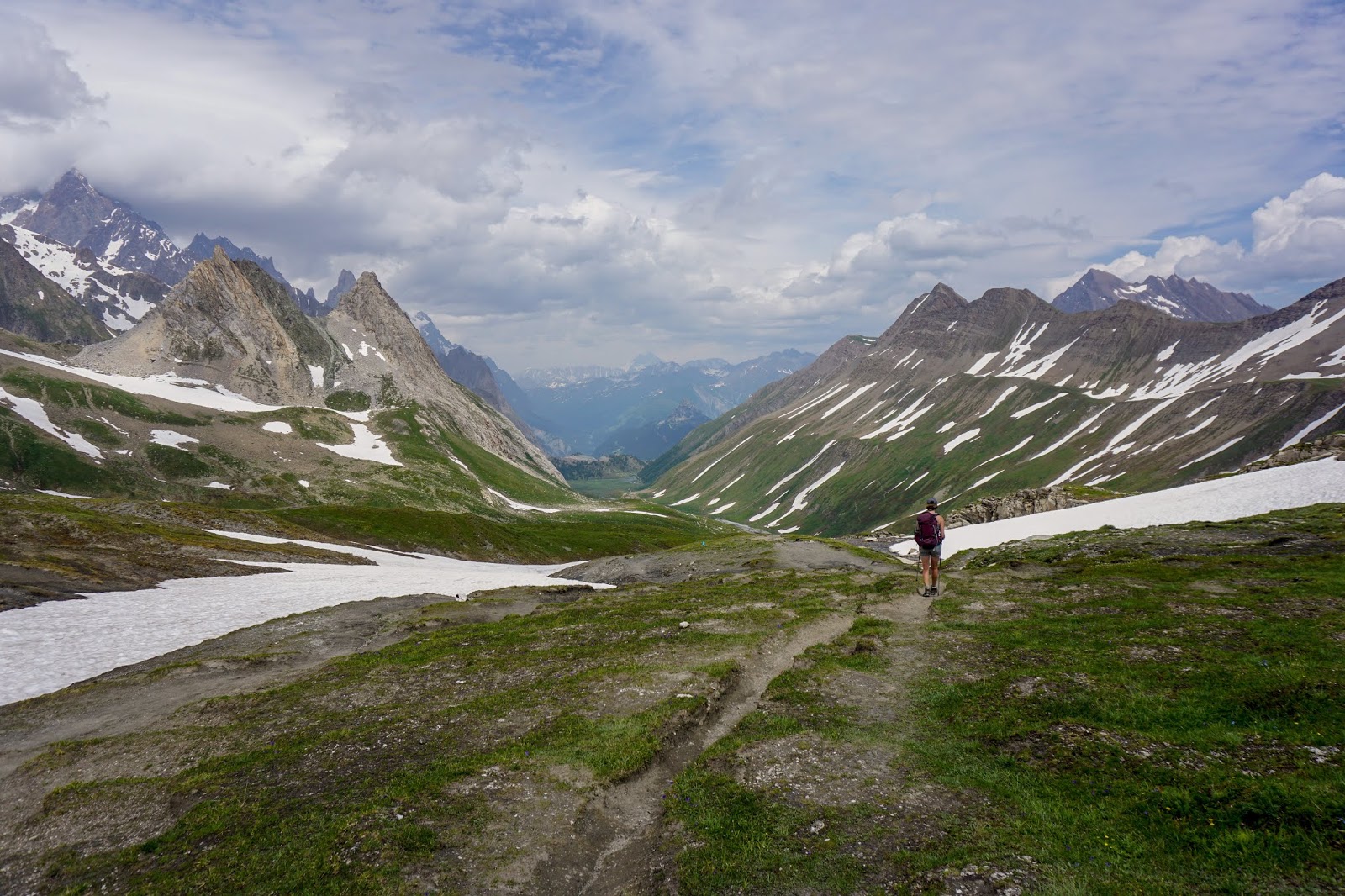 Terrain
The TMB is well traveled and well maintained. We found the terrain to be friendly for the most part which made it easy to cover a lot of miles in a short time even with the constant elevation gain and loss. There were a few spots we had to check the map, but for the most part it is hard to get lost on the trail. However, be sure to check out all possible routes beforehand as there are many alternates you can (and should) take. These alternates are usually tougher and give you better views! 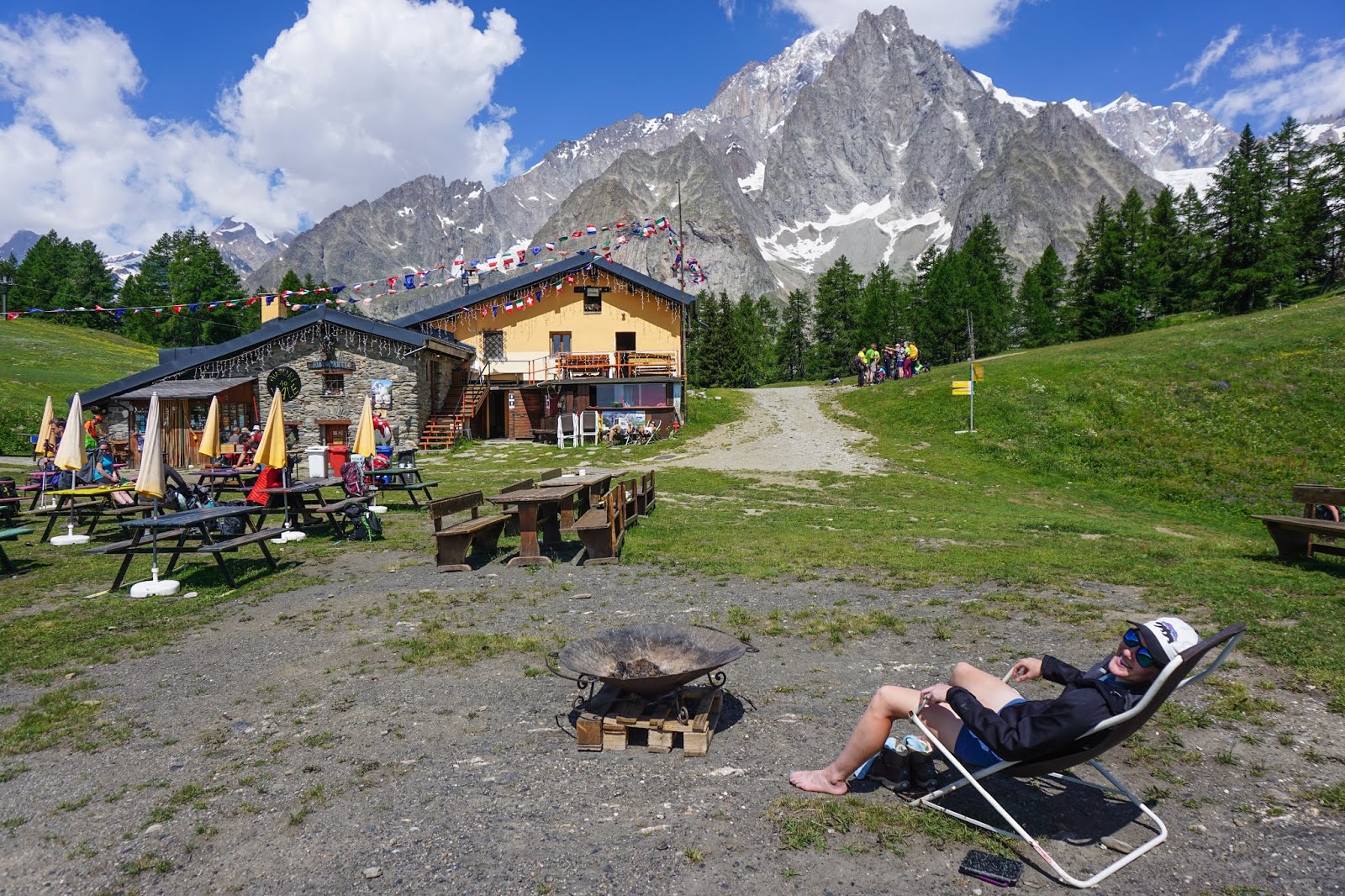 Refuges
You MUST book your refuges in advance. We booked about 4 months in advance and got denied by a few full refuges. Fortunately we made it work although our days weren't exactly even. Keep in mind that all refuges are not created equally. We found the more remote refuges generally had worse accommodations (such as Bohnomme and Elisabetta). It's a trade off, because these also have the most spectacular views. I would recommend not picking up a bagged lunch from the more remote refuges and instead hitting a grocery store if you're near a town or else stopping for a meal at one of the refuges you hit during the day.


We stayed at only two refuges that did not have showers (Bohnomme and Bellachat). Most of the refuges even had free showers, although some weren't exactly hot. Additionally, we found it easy to wash clothes since almost all of the refuges had large sinks and clothes lines.


Overall the food was pretty good, although we thought the refuges on Alta Via served better food. Generally places had a set menu without options, but accommodations could be made for dietary restrictions. 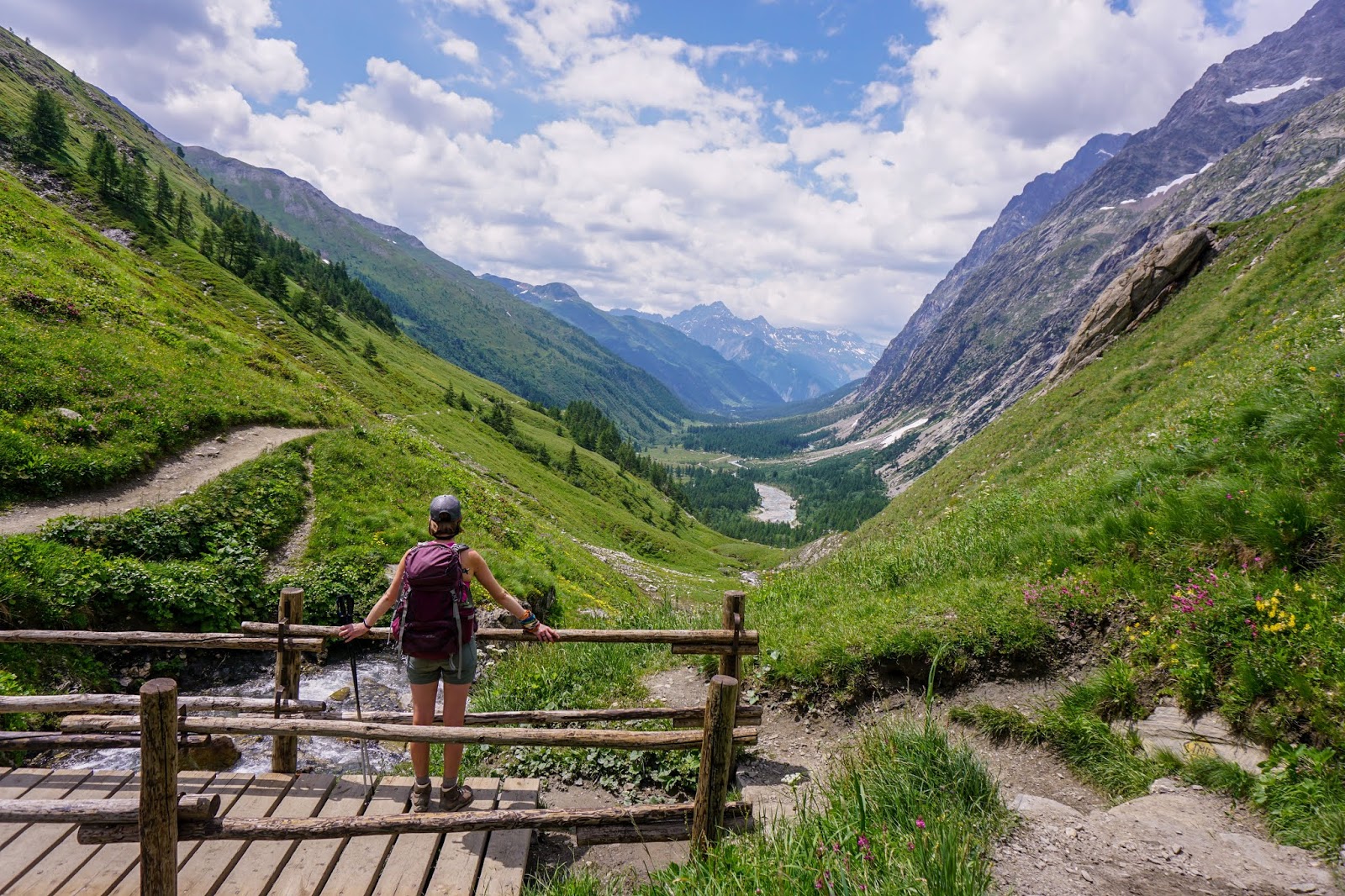 Weather
At the beginning of July we had mostly sunny days with very little rain. We anticipated afternoon storms and were pleasantly surprised by the clear days. Everyday the temperature peaked in the 70's although some sections of the hike at higher elevations were chilly. We saw large patches of snow but nothing that really impeded our trek. The worst for snow was Col du Fours which looked a bit like a ski slope going down. We found the Fenetre d'Arpette to be easily passable with less snow than Col du Fours. 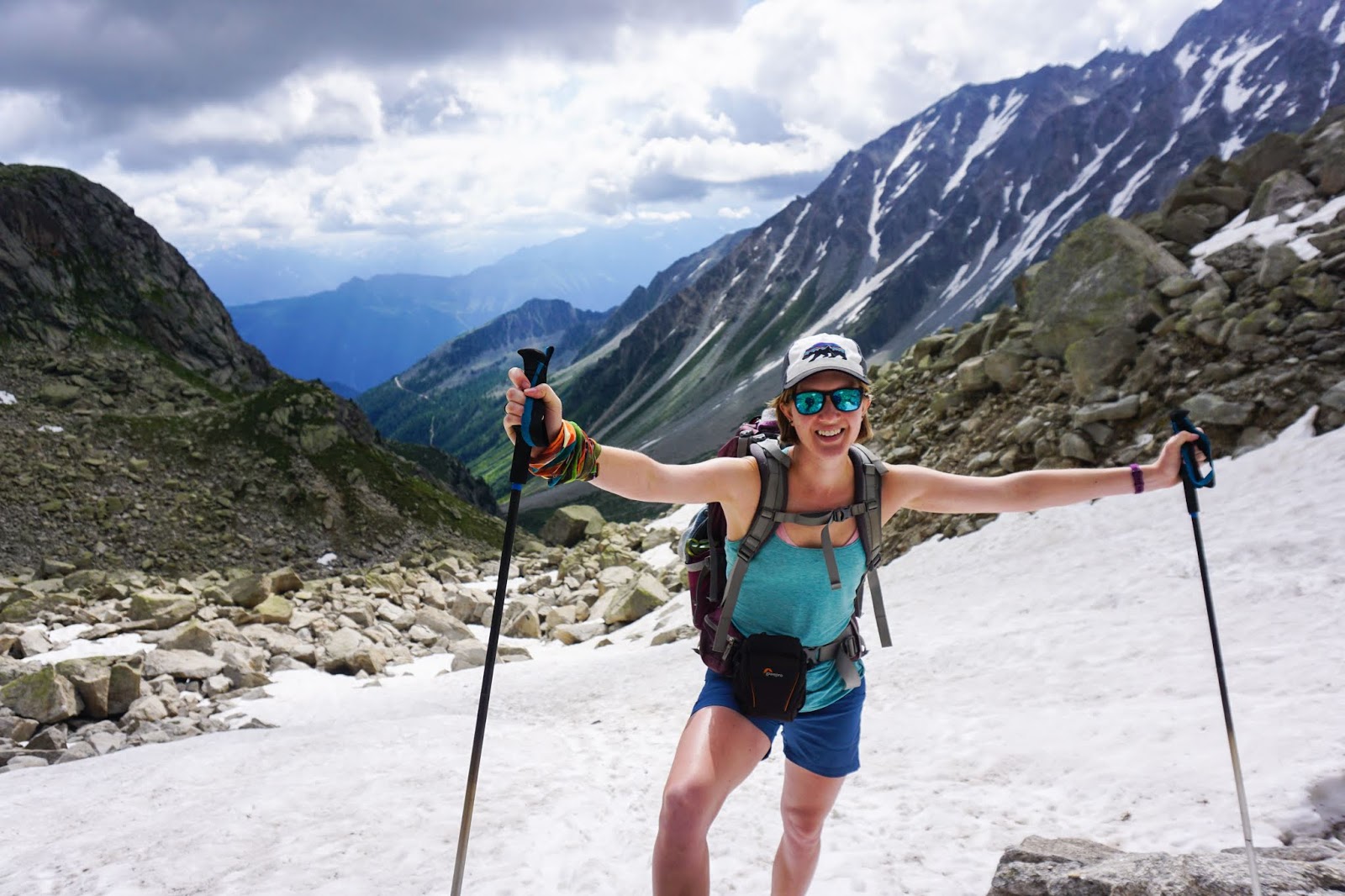 Pace
Research indicated that traditionally it takes about 11 days to complete the trek with one rest day. So we planned on 12 days with two 3 mile days instead of one zero day. Reflecting on the hike, we could have completed it in as little as 9 days. We just found the days to be comfortable and felt like we could have continued on for a couple more miles several days. However, part of the fun of sticking to the traditional itinerary was meeting other hikers who we kept seeing throughout the hike.

Unforgettable: Seeing the cows grazing at Refuge de Miage with Mont Blanc in the background.

Notable: The terrain going from Col du Tricot down to Refuge de Miage was some of the rockiest we hit on the trail.

Difficulty: Pretty easy day since we took the cable car and cut out about 2 hours of uphill. Looking back we didn't need to take it, but we were nervous about wearing out our legs too early.

Unforgettable: The diversion to Lac Jovet. The lake was stunning and it was great to hike a bit without packs.

Notable: The Col du Bonhomme pass is a trick since you have to keep going higher after hitting it.

Difficulty: One of the more difficult days due to the amount of uphill.

Unforgettable: A tie between Tête Nord des Fours and going down after Col du Fours which felt a lot like hiking down a ski slope.

Notable: In Refuge Elisabetta we slept in a 30 person bunk bed.

Difficulty: Going down from Col du Fours was the most difficult part of the day because the snow made it easy to slip. Overall it was a day with a lot of down and then a fair amount of up.

Unforgettable: Lunch at Refuge Maison Viella and then being in a real town where we could do laundry, have a private room, and get gelato!

Notable: We were hailed on for all of five minutes after which the sun came out and it looked like a beautiful summer day.

Difficulty: One of the easier days. A lot of downhill into Cormayeur.

Unforgettable: Relaxing at Refuge Bertone and enjoying the view of Cormayeur.

Unforgettable: The alternate to Tête Bernarda. We started at 6am with a packed breakfast from the refuge and it was well worth it to have the green hills to ourselves with mountain views as we walked along the ridge.

Noteable: We figured this would be our longest day and we were a little nervous about the time, but since we started so early we were able to stop at Refuge Elena for one last lunch in Italy.

Difficulty: A lot of mileage and a fair amount of up and down, but nothing that stands out as a particularly difficult ascent or descent.

Unforgettable: Avoiding the slightly angry looking cows who refused to move off of the trail.

Difficulty: One of the easiest days. Gradual downhill to La Fouly.

Unforgettable: The trail is pretty dull here so someone carved at least a dozen intricate wood sculptures for hikers' enjoyment. We also adored the baby goats at Relais d'Arpette.

Notable: We stopped for some coffee at a restaurant that overlooked Lac Champex and were blown away by the high Switzerland prices.

Unforgettable: Definitely the Fenetre d'Arpette. This is the most hyped about part of the trail and we kept hearing stories of hikers helicoptered out and even a death the week before we were there. The view at the top and down the descent was incredible.

Notable: The Fenetre was not as bad as we anticipated and we actually enjoyed the challenging rocky terrain where we had to climb over large boulders.

Difficulty: One of the tougher days because of the terrain and the descent down from the Fenetre was a knee killer.

Notable: We ran into many hikers we met along the trail at Moulin, which turned the afternoon into a party.

Difficulty: A bit of a climb up to Col de Balme and then gradual up and down after.

Unforgettable: A tie for having crepes at Lac Blanc and ending up on a trail that was not the TMB which took us to Col de la Gliere. This was the most difficult section of all of the hiking we did due to snow which made traversing the mountainside dangerous.

Difficulty: By far the most difficult day due to our accidental alternate. The climb up to Col de la Gliere was brutal. However, this was also one of our favorite days because we hiked and saw so much. 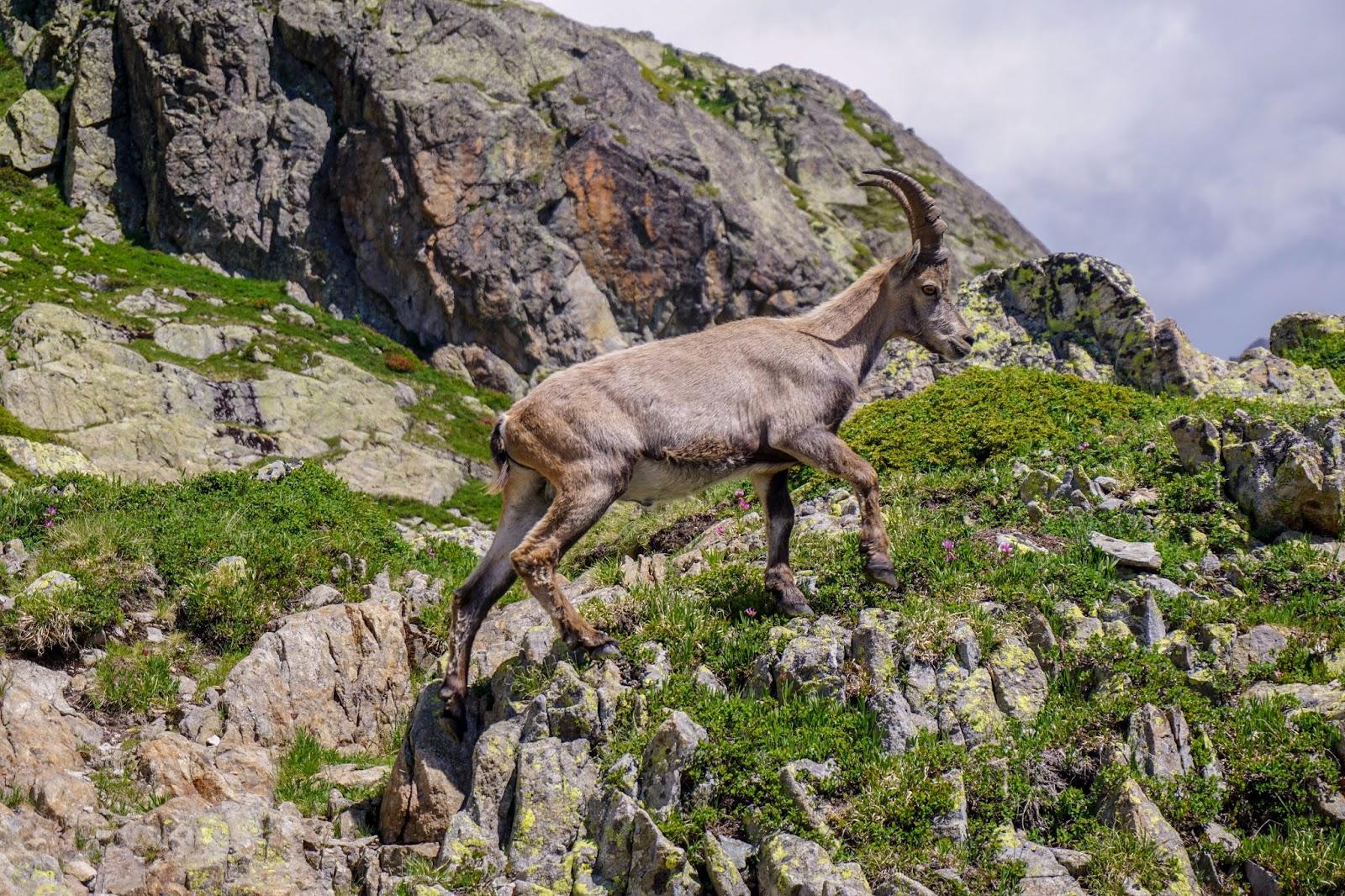 Unforgettable: Enjoying the restaurants and shopping in Chamonix.

Difficulty: Easiest day. All we did was hike down into Chamonix.


Posted by Courtney at 11:30 AM
Email ThisBlogThis!Share to TwitterShare to FacebookShare to Pinterest